Heritage Day (2) on BIRDS.
Enjoy the children's reports on this exciting day! A big 'thank you' to Darcy and Ben for their efforts.

We had our second Heritage Day on BIRDS in St. Mary’s  on
Friday 23rd November 2012.  We were looking forward to seeing Caitríona McCabe from the Heritage Scheme again. In October she did a very interesting workshop with us on trees.This time we knew she would be focusing on birds so we did some preparation by learning to recognise some common garden birds.

The senior day (Third to Sixth Classes) began with a powerpoint presentation in Mr Macklin’s classroom.

Firstly, Caitríona explained all about Bird Watch Ireland’s Schools’ Garden Bird Survey. It didn’t seem difficult so we were keen to participate in this new project beginning on 3rd Dec. 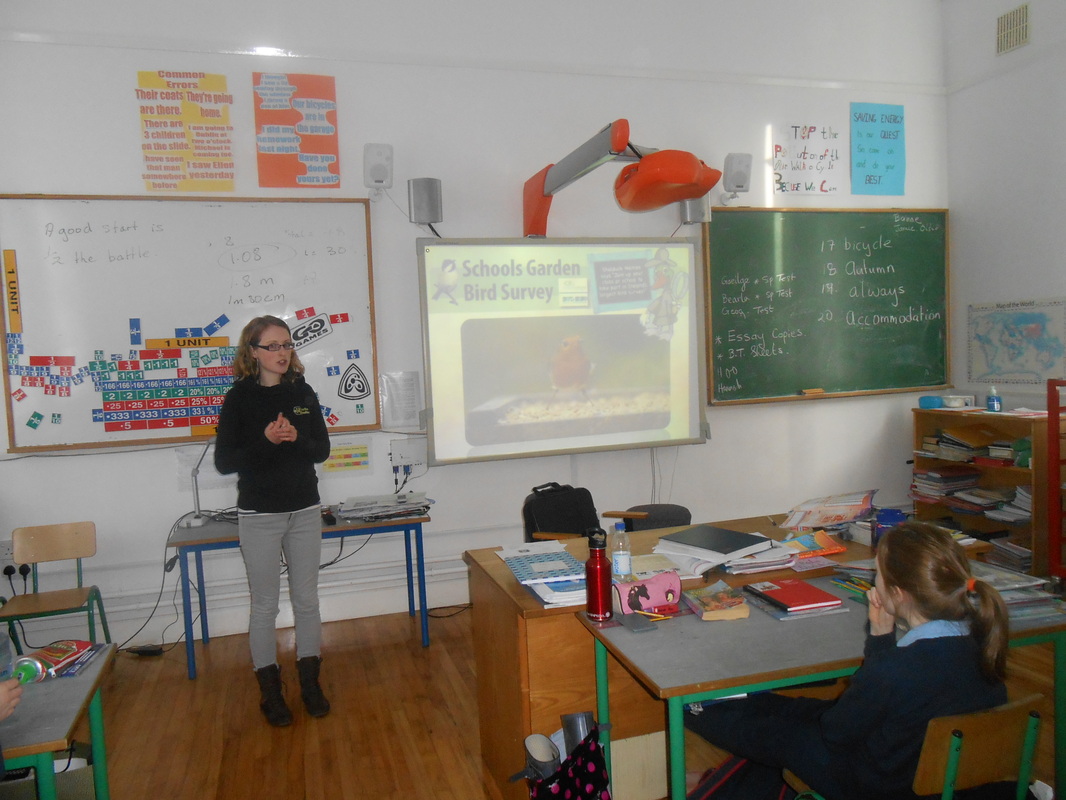 Next, Caitríona went on to tell us some exciting facts about  some well-known garden birds.

2.The Wren:  eats insects including spiders.

3.The Great Tit: its song sounds like “teacher,  teacher”!


4.  The Blue Tit:  eats greenflies and a special yellow caterpillar.
It can’t manage large nuts in  bird food.
It cleverly began to open the foil caps on milk bottles in London in
the1920s, a practice that spread!
5.  The Blackbird:  the female is brown.  It loves to eat worms and apple cores.
It can often be  seen with its head to one side listening for  worms in the ground  or
scattering leaves to  find the worms underneath!


6.  The Starling:  Murmuration is a common  practice among  starling who gather in their 100s and 1,000s painting the  sky!   The reasons for this: Safety in numbers. Warmth in large grouping. Communicate to each other where the food  supply is.

7.  The House Sparrow:  takes bathsto rid itself of mites and lice.
It has a strong beak to crack the hard shells off the seeds.

8.The Chaffinch:  its Irish name is “rí rua” which  means red king.  It likes
seeds & nuts.  It sings a different song when its about to rain.

9. The Magpie: is regarded as a pest.
It will eat: Baby chicks and other birds’ eggs, Lambs’ eyes if very hungry , Dog food and road kill,  Insects, Apples and
bread.

After lunch, we went outside with Caitríona to try and observe these
birds in their natural habitats.
For further information, read Ben Duffy’s report.

This report  was written by Darcy Colleran (Fourth Class)

On Friday the 23rd of November 2012 Caitríona  Mc Cabe returned to St. Mary’s N.S., to do some bird studies with us . After big break she took 3rd and 4th classes out to do some bird watching .Firstly she showed us a ball of fat which contained oatmeal . Next we were shown nyger seeds. Finches enjoy eating this seed.  She also showed us sunflower seeds and other kinds of seeds. 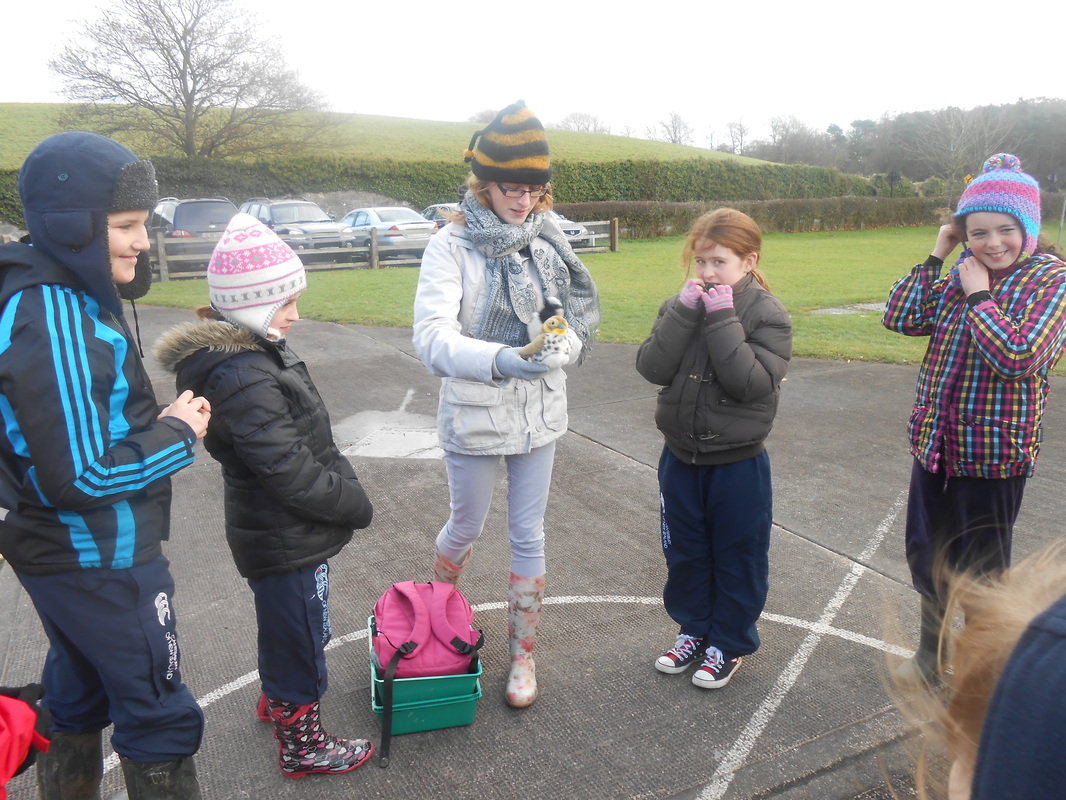 Caitríona  went on to tell us that birds sing
1.   to attract mates and
2.   to mark their territory .

So as an example she took out some teddy birds that sang different tunes.  We had to decide which song we preferred from a choice of three: the blackbird, the house sparrow or the song thrush.

We learned that birds call as well as sing.
Usually they call to alert other birds when their safety is under
threat.  After that she told us that starlings can copy other birds’ calls, car sirens and car alarms. She told us that the characteristics in birds are:
1.   Feathers
2.    Beaks
3.   Firculas  (A v shaped bone to protect the bird’s chest while  flying ). 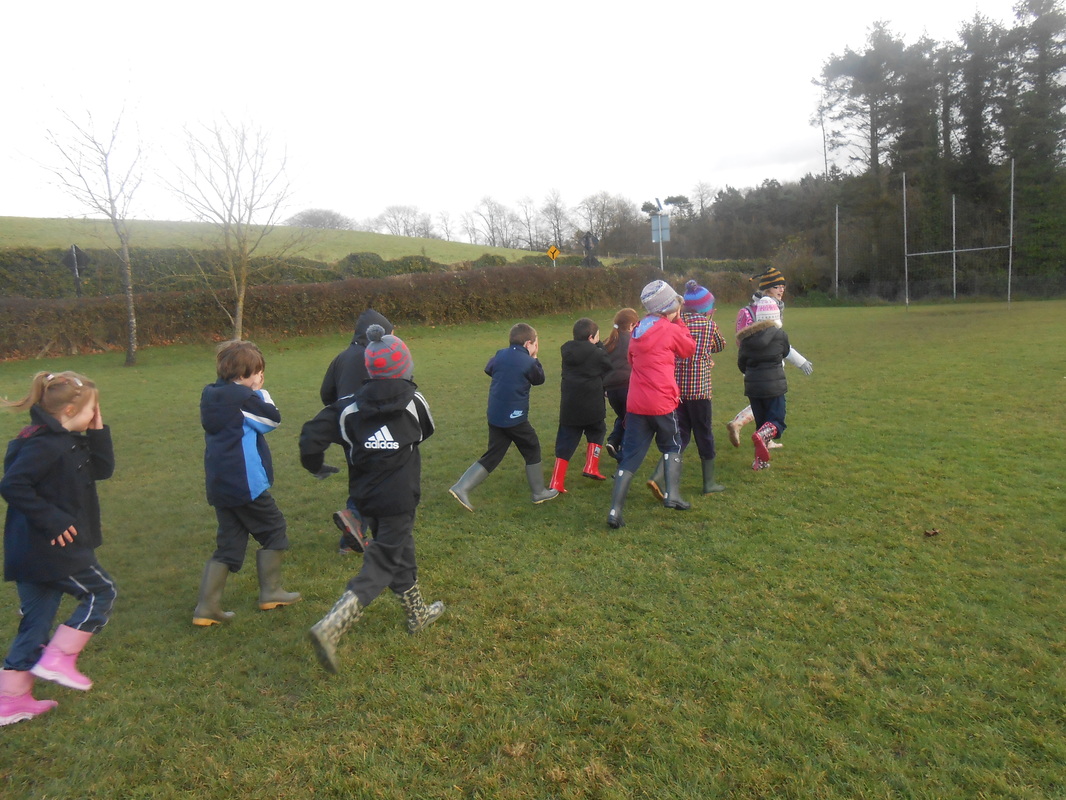 Next she played a game with us.   We stood in a circle with our fists held
up.  We had to stay very still and keep putting up a finger for every noise we heard.
We heard car sounds, the wind blowing and birds chirping.

Caitríona  told us that geese fly in a v-shape because they have eyes on each side of their heads .  So we pretended to be geese and ran towards the forest in a
v-shape.  While in the forest we stood and listened for a while but had was no luck in hearing bird song. She explained that the day was too cold for birds to be out and about singing.  They were probably tucked up nice and warmly in their nests.
So we waved our arms and “flew” back to the school.

In the classroom, we  played a game called bird bingo.  We each got a card with 20 different birds and some counters.  The winner was the first to have five birds in a row. We played bird bingo for a while and then it was time for Caitríona to go to 5th and 6th Classes to do birds studies and outdoor activities with them until 3 o’clock. 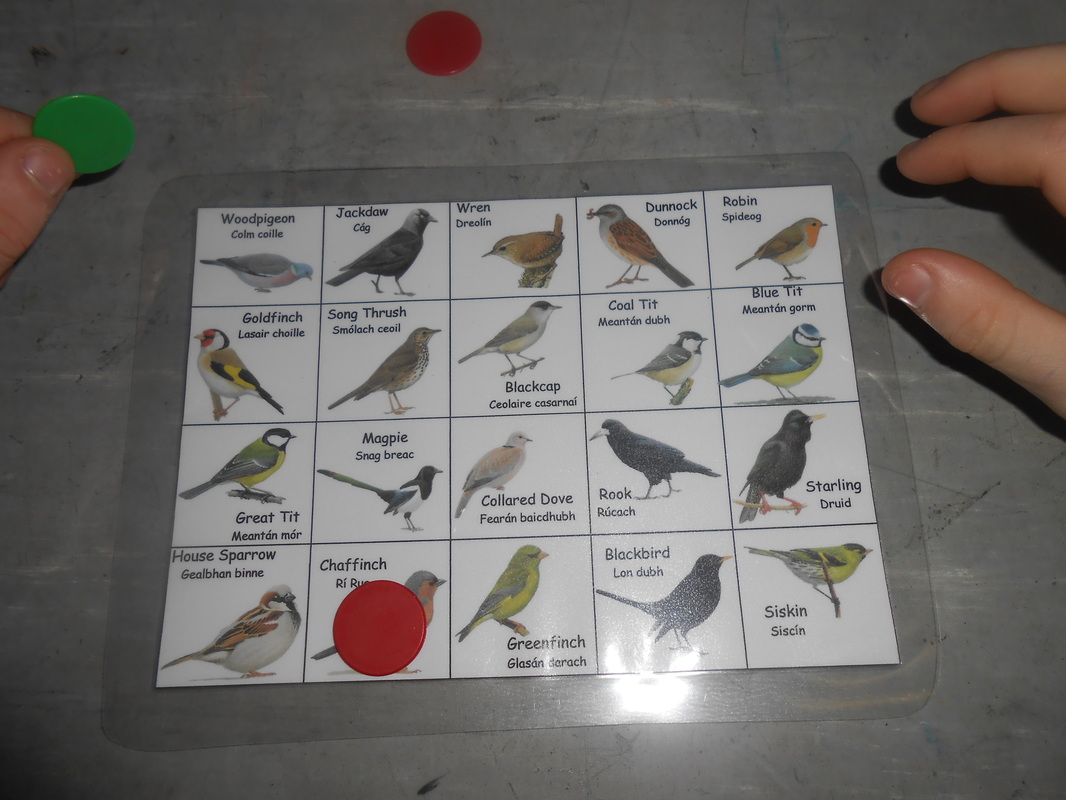 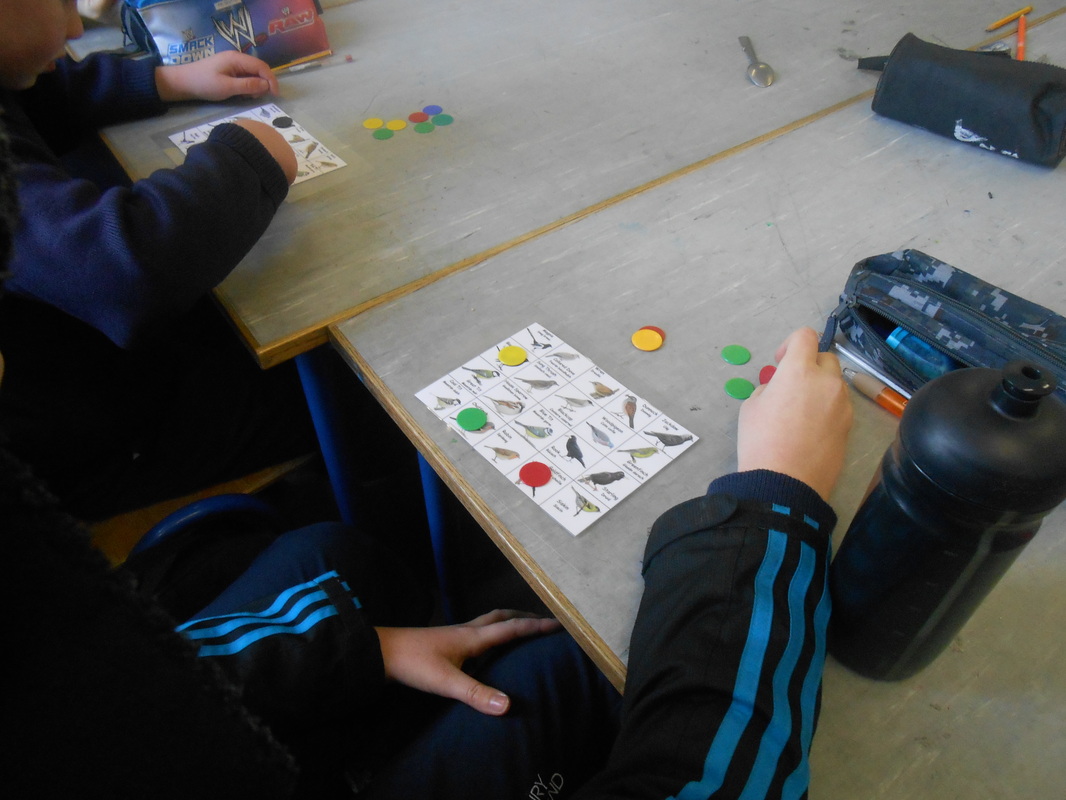