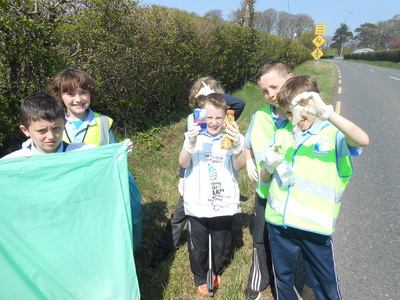 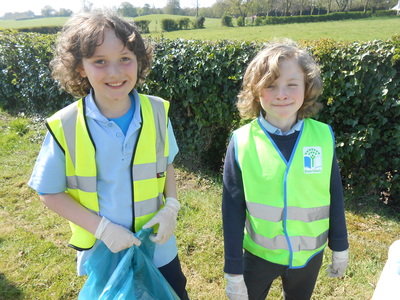 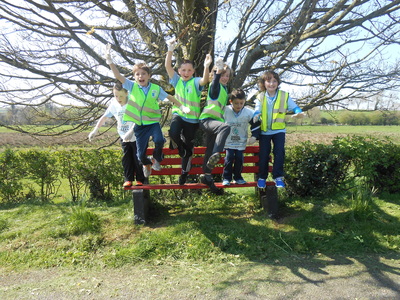 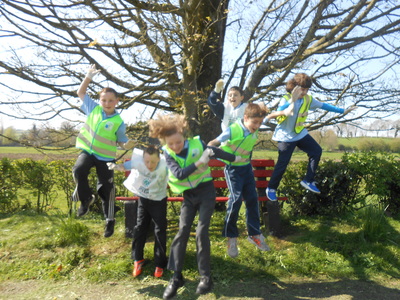 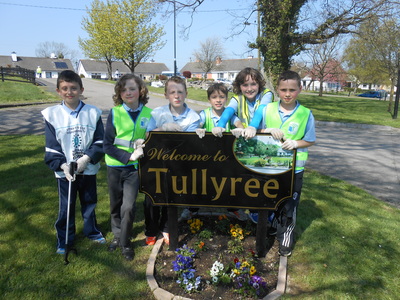 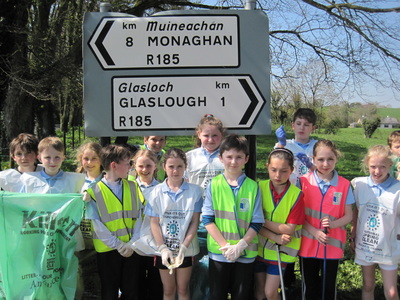 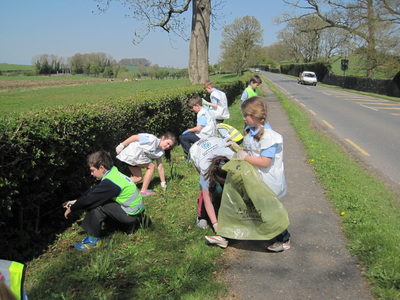 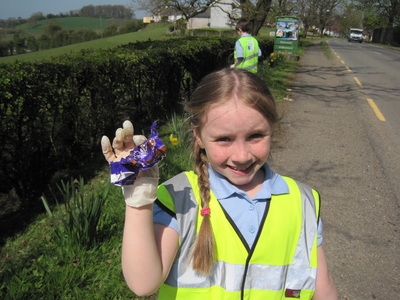 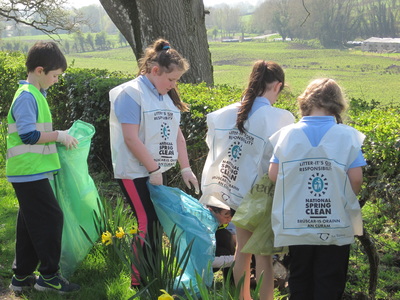 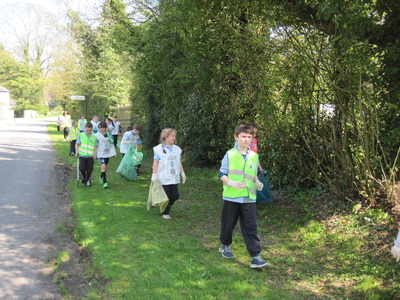 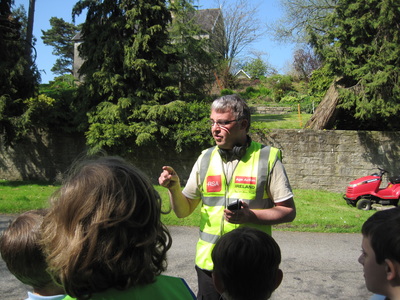 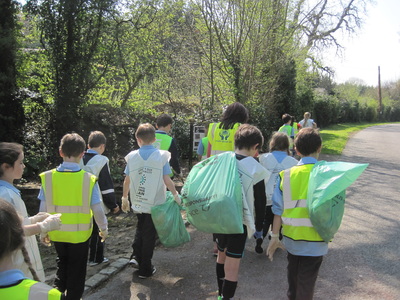 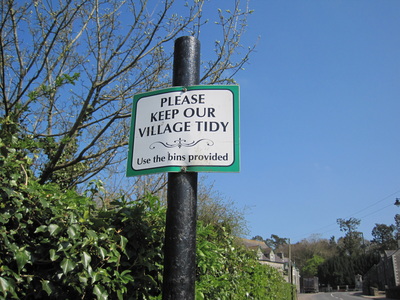 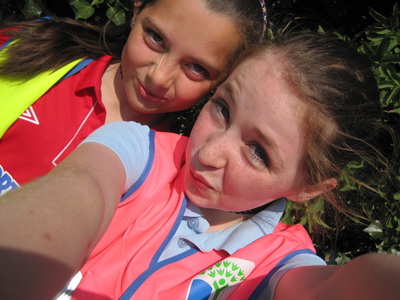 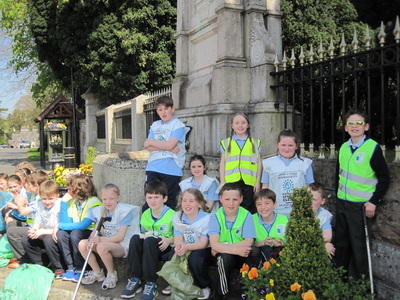 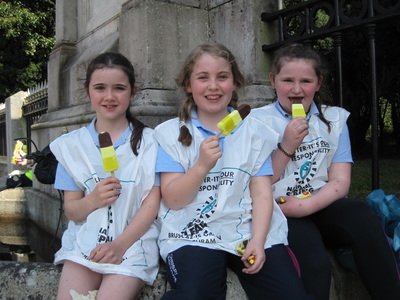 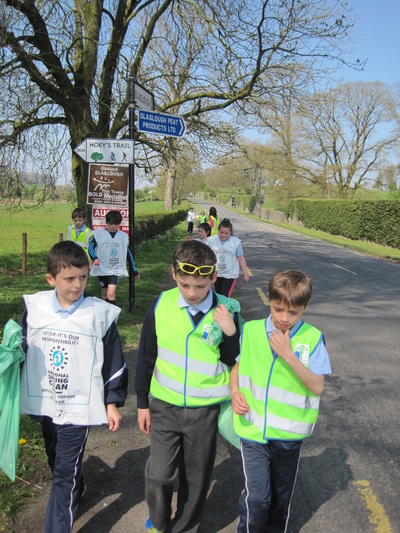 We planned to have our annual Clean-up day on Wednesday 22nd of April.   Luckily the day was warm and sunny.  We had normal lessons until lunchtime.

At 1:15 we got our hi-vis jackets and litter aprons.  Some pupils wore gloves and others had litter pickers.  We had different coloured sacks: green for general refuse, blue for plastic bottles and gold for cans.  Before leaving the school, our teacher Mrs Dowling took a group photo.

Then we were divided into three groups.  At the crossroads Miss Treanor turned left with the Third Class boys while teacher and the rest of us went towards the village.  We picked up a lot of litter on the way.  I was able to get the litter in the bushes because I had a litter picker.  Most people had plastic gloves.

When we arrived in the park, I went to the Butterfly Garden.  Others went to the Biodiversity Garden.  Soon we got back out onto the road again.  We walked down Barrack Hill and stopped at the Horse Pond.  My uncle Gareth who was mowing the grass took our photo and told us about life in Glaslough in the early 1900’s.

After that we all walked to the fountain and waited for our teacher.  We had no idea where she went.  Suddenly she came back with a big bag of ice-pops.  They were lovely and cool in the hot sun.  After that we had a fun walk back to the school where it was almost home time.

I will be looking forward to next year!

This year`s Annual Green Schools` Action Day took place on Friday 2nd May. The whole school took part. Infants to Second cleaned the school grounds while Third to Sixth targeted the approach roads. The weather was perfect and the children did an excellent job. 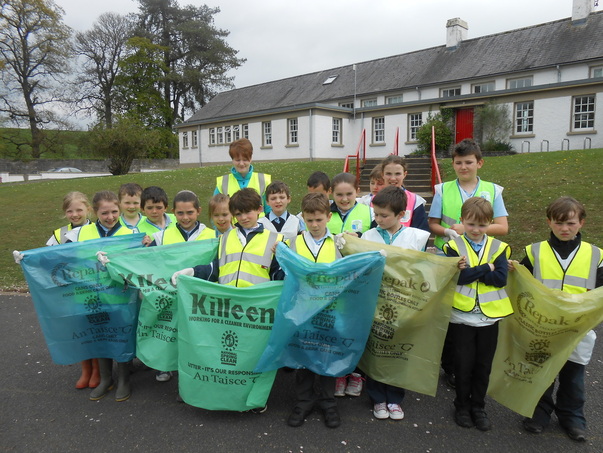 Third and Fourth Class pupils with Classroom Assistant Miss Bothwell ready and eager for action. Wearing apron, gloves and high-visibility vests supplied by An Taisce, they cleaned the area between St. Mary`s school and Glaslough Village which is 1km in distance.
They were divided into teams carrying different litter bags: bottles, cans and general refuse.

What looked like a relatively clean stretch of road yielded lots of unwanted materials when this army of litter-pickers got to work. They found bottles under bushes and empty cartons under leaves and cut grass.
They finished in the Oakland Centre Playground and Biodiversity Garden. Not a scrap of paper remained. They felt very pleased as they brought the refuse back to the school.

The 16th of April 2013 was St Mary’s Action Clean-up day. It was a dry but very windy day. An Taisce supplied bags, aprons and gloves and Monaghan County Council provided a skip.

All the pupils took part in this event. The Junior Classes from Infants to Second did the clean-up in the school grounds while 3rd to 6th  Classes  decided to clean up the approach roads.

At 11.15 am Third and Fourth started their clean- up day along with their teacher Mrs Dowling .  They put on high-vis vests and gloves, got litter pickers and a variety of refuse sacks. They started at the school and went towards the village (R185), collecting litter along the route.

When we got to the village we took a rest.  Then our teacher said that we have to run from the village to the school which was 1 km for our cross country training. Everybody took part.

At the school we threw all our refuse bags into the skip beside the school garden.    All in all it was a great success.

Fifth and Sixth undertook the Annual Spring Clean on Monday afternoon, 15thApril.
Thanks to An Taisce for providing the cleaning gear and to Monaghan Co. Council for delivering a skip to the school.

We collected lots and lots of rubbish that motorists had discarded.  It was a disgrace to see the litter and cigarette butts everywhere.  So if you could just pick up litter from
time to time, it would be a great help in keeping our village looking beautiful.

Pick up the Litter and Make Glaslough Glitter!

On Tuesday, 16th April, Glaslough Tidy Towns Committee and other willing volunteers met at the Oakland Centre at
6 o’clock to participate in the Annual Spring Clean.

We were split into 5 or 6 groups and sent to a different area in or around Glaslough to pick up the litter.
We picked up several bags of rubbish including old footballs and tricycles.

After we had finished, we got some refreshments.  The clean-up took about 3 hours in total but it left the village looking spotless.